Ultrasonic velocity and attenuation measurements can be used as a versatile analytical tool to detect struc-tural changes in complex fluids. Ultrasonic velocity measurements can be used to characterize complexation reactions in dilute biological and synthetic polymer solutions or gelation phenomena in food formulations. Attenuation measurements are sensitive to structural changes and phase transitions in emulsions and surfactant solutions. In particular the dynamic glass transition temperature Tg,dyn of polymer particles in dispersions or suspensions can be determined with high accuracy. This is relevant whenever thermal analysis is either not sensitive enough or the heat flow is dominated by other phenomena, like the crystallization/melting of the aqueous phase. Tg is accessible even in complex colloidal systems with low polymer content (e.g. coating colors). Isothermal measurements are used to monitor emulsion polymerization reactions and to study the kinetics of swelling phenomena. During the reaction process the sound velocity increases by about 150 m/s and the attenuation coefficient changes by more than 75%. At the beginning of the reaction the fractional conversion of monomer to polymer can be obtained from the sound velocity after calibration. In the later stage of the process polymer relaxation dominates and a goes through a sharp maximum when the reaction temperature matches the dynamic glass transition temperature Tg,dyn of the polymer/monomer mixture within the droplets. Then the conversion can be directly calculated from T g,dyn.

Swelling or plastification of

Phase transitions of surfactants in emulsions;
Complexation and aggregation of polyelectrolyte complexes in aqueous solutions;
Monitoring of emulsion polymerization reactions. 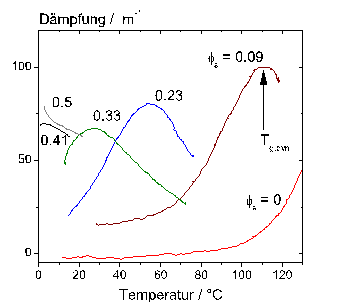 Fig. 2: Effect of temperature on the US attenuation of PS dispersions different volume fractions of ethyl benzene fs.

Fig. 3: Ultrasound attenuation and velocity as a function of time during the miniemulsion polymerization of polystyrene at different initiator concentrations.

Fig. 4: Conversion as a function of time for miniemulsion polymerization of styrene at different initiator concentrations. Closed symbols refer to gravimetrically determined data, open symbols to conversion values obtained from ultrasound attenuation, and solid lines to the values calculated from the initial decay the ultrasound velocity.